For me, road cycling was always going to be about road racing. When I got my road bike at the end of 2012, after years of commuter cycling, I knew I was going to end up competing; the question was when. After eight months of riding 200-300km a week, through the hills north of Eltham, I felt ready.

I’d been keeping an eye on the Northern Combine’s races and coinciding with my feeling of race readiness was a course that looked like it would play to my strengths. Alongside Preston CC’s Alf Kimpton Memorial Handicap, which raced three 30km+ loops of Broadford, was a combined D and E grade scratch race of two laps on the same course. I knew I could sustain close to a threshold effort over a hilly 65km as this was the same distance as a return trip to Kinglake from Eltham.

Race day came on August 10. We drove out to Broadford, through fog and patches of light rain for the 10am start. The weather cleared just as we took the Broadford turn off from the Hume Freeway, but the skies remained grey:

As Phil Liggett says, its when the cows are sitting down you have to worry. (photo: katrina)

I was familiar with some of the Broadford loop from a 222km ride out to Tallarook earlier in the year, but I’d also come out and reconnoitred the whole course two days earlier. I didn’t know quite what to expect from the other riders but all the exchanges I had with those warming up seemed to be about the hills, and I took this as a good sign. I’d waited until I felt I could contest the finish of a lower grade race before throwing my hat in the ring.

We were advised to have a neutral roll out for the start of the race but I don’t recall an
end point to this being defined. I tried to stay near the front of the bunch (of about 20) as we headed north on the first lap, towards Sugarloaf Creek. I didn’t much like the bike handling of a couple of guys in the bunch, and this nervousness made me lean towards getting away early.

On the second last turn before the Suglarloaf Creek climb, I jumped from about five places back and attacked as hard as I could. As I reached the top of the hill I could look down and see riders were still climbing the section before the hairpin in its middle. I guess I’d at least put an end to the neutralised riding! A lot of thoughts ran through my head, and most of these were variations on the impossibility of wining by breakaway on the first leg of the first lap of my first race. I tried to hold a gap after the climb, but a group of riders were on my wheel as soon as the ground flattened out. I had, however, split the bunch in two. As this was a combined D and E grade scratch, I suppose the grades were sorted by this point.

For the rest of the first lap I rode at the front of the pack, maintaining a steady, but sub-threshold, pace. I really hoped someone would come past, but I also got the feeling no one would want to cooperate with me after my little dig.  One guy said something in my ear like, ‘the peloton has got a target painted today’ – maybe not his exact words but it succeeded in making me uncomfortable. I led the group through the finish line for the last lap then decided I really should back off to conserve some energy.

Leading the bunch on the first lap. (photo: jouptonphotography.com.au)

In letting myself drop to the back of the group, however, I almost lost touch. I really thought I’d lost the contesting group, now down to about ten riders, after the second Sugarloaf Creek climb, but somehow I clawed back on again.

The skies had cleared and the conditions were warming as we made our way down the southbound leg of the loop for the second and last time. I finally sat back on the front for a bit, but at a reduced effort. No one complained.

Hitting the last significant hill of the southbound side, about 7km from the finish I went all out and got what looked like a real break on the others. I’d noted the laboured breathing of some of the better climbers in the bunch as I passed them and figured it was now or never. I buried myself in the task to get to the line first and alone.

Through the next few undulating kilometres I lost sight of the chasing group but urged myself not to back off for a second. For a moment I entertained the thought that I would win but then I looked back once more and saw two riders gaining on me. I was definitely conceding ground to them over the last couple of hills and as the finish line came in to sight I knew how wrecked I’d feel to steal defeat from the jaws of victory. I was giving it everything I had up the last climb to the line and still felt like I was crawling! Finally the chequered flag was waved at me. I’d been fast enough, and I’d come home for the win. 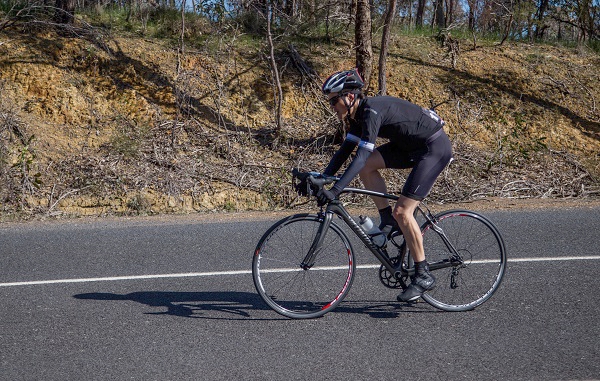 The culmination: solo breakaway for the win. (photo: jouptonphotography.com.au)

A week later I entered the D grade road race at Kyneton. The distance and elevation was similar to Broadford but the conditions were worse. A few light showers hit us, but worst of all was a blustering headwind across half the course. At the end of the race I emerged over the last climb in a group of four to contest the finish – with a further twenty or so riders strung out behind us. The four of us started rolling turns and then I got a rush of bravado and figured I’d sprint for the win. I mistimed my sprint, hitting the lead, but having the other three sweep past me on the line. I later compared our sprint speeds on Strava and I figure I could have won the race if I hadn’t gone so early.