A summary of events in late November – early December.

First time in the Dandenongs.

After focussing on racing every weekend through October and November, I decided to take some time out and just have some fun.

Since I’d taken up road cycling all my training had been done in the Kinglake Ranges, Nillumbik and Whittlesea – I’d still never been to the Dandenongs. I contacted my friend Jeremy and he put together a tour of the area. I was looking forward to the ride but I spent the preceding week indulging myself with climbs, without too much concern as to how it would affect my Dandenongs times. On the day before the Dandenongs ride I broke the seven minute barrier on Mt Pleasant Rd getting a time of 6:41.

Heading south the next day, I felt a little sore from the previous days efforts and rode cautiously through more suburban traffic than I am used to. Reaching The Basin at the start of the 1 in 20, the weather was pretty cold but I was happy to finally taking a stab at the climb. Although I had my power meter back on the bike, and knew what level I could hold over the time I roughly anticipated getting, there was still some uncertainty in hitting the climb for the first time. I finished with a time of 15:50 which I was pleased with for a first attempt.

The rest of the ride was a blast, with an easy go at the Wall, a trip up to the SkyHigh lookout and the long descent back down from there.

All year I’d been thinking of getting a better wheel set. The Fulcrum 6 set I’d been riding all year were an OEM set made for Specialized with bits of Fulcrum 5 and 7 and with a weight approaching 1900g. After a bit of research I decided I wanted Fulcrum Zeros.

On December 5 I put the wheels on and the next day I went out to tackle Kinglake. At times during the climb I really felt like backing off but if I didn’t set a PR I’d feel a bit silly for having bought the wheels! I fought through a few mental barriers and ended up with a new personal best of 18:49 (or 18:37 using the cycle2max start and finish points). The next week I took a few seconds off Mt Pleasant, getting down to 6:39.

For better or for worse, the evolution of my bike through the year has reached its end. This will be my race machine for at least the next year: 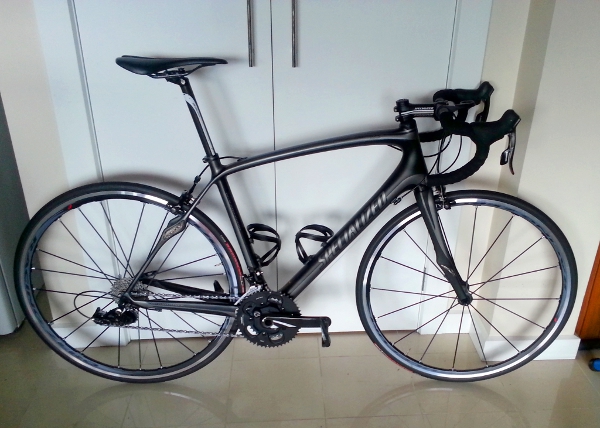 Owning a set of race wheels, means I also now have a set of training wheels and this creates the possibility for something silly and fun.

The cycling friend who had first encouraged me to consider training with power  also took his road bike on the unsealed roads around the area soon after we’d met. This inspired me, and having ridden all the sealed roads countless times I was keen to try it, but didn’t think my race tyres would stand up too well. But with my race tyres on the zeros I put heavy training tyres on the 6s and now I was set to take on some dirt.

There is a big network of unsealed roads in the area and these are rarely explored by road cyclists. Whilst it takes a bit of bike handling nous,  the dirt doesn’t have to belong to just mountain bikers and cyclocross riders.

My route took me on the unsealed Ridge Rd from Watsons Creek to Christmas Hills, followed by the climb up One Tree Hill Rd, then up Spanish Gully Rd and back down Broad Acres and Long Gully Rd to Watsons Creek.

Ascending One Tree Hill was very pretty. No sight or sound of traffic, just me and the track and the bush, accompanied by the mournful piping of the White Winged Chough.

Down from the top of One Tree Hill.

When I finished the last section of unsealed road, coming out on to Alma Rd, I have to admit to feeling relieved. But I’d had great fun.

The next week I went out and took on Skyline Rd, from Bend of Islands to Sugarloaf Reservoir. This section of track was rougher hewn than my previous weeks tracks, and I flatted on my first attempt. But after a quick (actually pretty slow) tube change I set off down the road and completed another unsealed adventure. Half way along the track I passed a road cyclist going the other way, walking his bike and looking like he wished he was somewhere else!

No ‘Park stand’ available, so I used a tree.

One goal for the summer I was looking forward to, was climbing all of Victoria’s alpine climbs. But as the year drew towards a close, and as I looked at my plans and non-cycling demands, I realised I would have few opportunities to fit these climbs in. Then, quite suddenly, I decided I was going to go off and do Lake Mountain.

I felt I was in pretty good form and had my new race wheels which took a whole half-kilo off the bike. After a brief warm-up I hit the mountain hard, figuring I could use my relatively light weight to my advantage on the steeper first section before aiming to hold threshold for the rest. This plan started out well, and I recorded the 10th fastest time on Strava for the steeper first section, but my mind wandered a bit after that. A period of sub optimal focus probably cost me a little time but I picked up towards the end, and as the air temperature dropped, and the hot road crackled under my tyres, I finished with the 16th best time on the mountain (for the 7 peaks segment time). 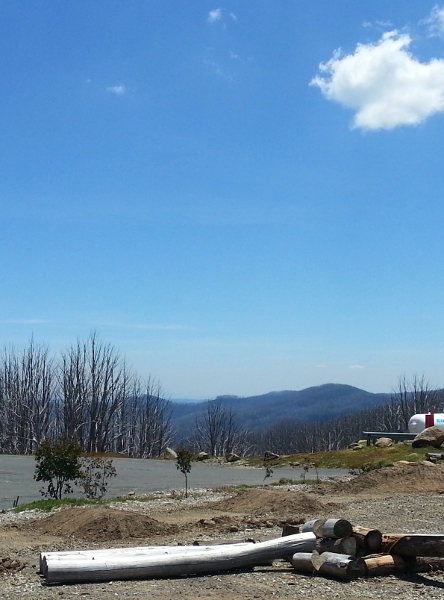 Lake Mountain: The view from the summit.

Of course fast times get set by guys who don’t upload to public websites, but I think that so long as we have NRS riders at the top of the segment leader boards, getting near the top can give you reason to be cheerful!

Cats vs button. #burmeseofinstagram
Unfortunately I wasn't dressed for the occasion ... #thingsyouseeonmtp #thingsrichpeoplethrowout
There's a bird!! #burmeseofinstagram
This could have been a lot worse ...
I thought this rider was indicating, but she was just dancing on the pedals ... #greenwedgecycling
Seen in #pantonhill this morning. I think there's a fine in Swiss francs for this kind of drafting ... #greenwedgecycling