On Sunday December 22, I woke early to the sound of rain on the sheet metal awnings outside our bedroom windows. The night before I’d suggested to Katrina that I might race the last crit of the year, organised by Northern Cycling out at Campbellfield, but now I was sure it would be called off. Soon the rain eased, and looking at the radar I could see only very light showers coming through. After a slow start I began to get ready to ride and decided I’d do an easy ride out to Strathewen and back. I’d finish the 65km in a couple of hours and then we’d head off for rounds of pre-Christmas socialising.

Just before 11am I set off, wary off some encroaching clouds which contrasted darkly with the otherwise drab grey sky. Soon I was through the Kangaroo Ground hills and on to Watery Gully Rd. Then, as I routinely do on my way out to Strathewen, I turned down Flat Rock Rd. 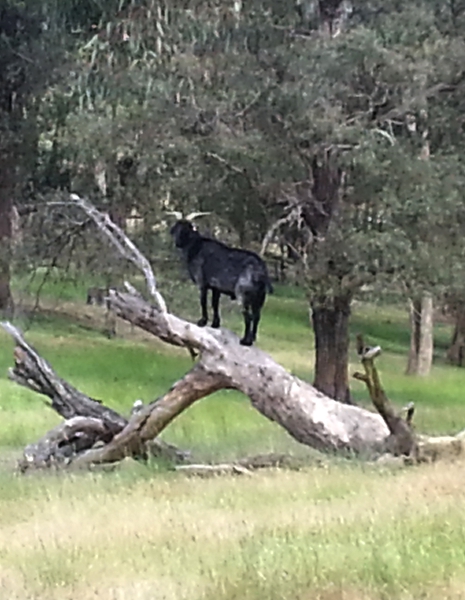 This is the actual mountain goat you need to channel to climb Flat Rock Rd.

Starting from the Hurstbridge end, Flat Rock Rd poses a challenging climb, featuring three steep ramps with sections between 8-12% over 2km before undulating for another 2.5km. Heading the other way usually involves less suffering. I had climbed and descended this road about 30 times for the year.

Half way along the descent I passed a rider ascending with a grimace of pain. I smiled knowingly and called out ‘good work!’ Then as I neared the final left hand bend before the long straight down towards Hurstbridge I began to bleed off speed.

As I leaned into the turn I noticed the white centreline marking and thought ‘be sure to avoid that, it’s probably slippery.’ But no sooner had I completed the thought, than I was struck by the terrible feeling of the bike disappearing under me. I had no time to react. There was only the moment of feeling the bike fall from under me, and then I was tearing along, body against asphalt, at 50kph.

I was apart from the bike now, I could hear it grinding against the road behind me – an awful sound. I spun and rolled across the asphalt, long enough to wonder – how far would I slide?

I howled a strange animalistic cry which I surprised myself with. Then after a few seconds I actually thought, ‘why are you doing this, no one is going to hear you?’ I shut up for the most part, but was probably whimpering as I realised I had to call for help. I had my mobile in my back pocket but I couldn’t reach it. I had movement in my right arm but it was burning with a big patch of skin missing, and when I tried to reach under my jersey I felt sharp pain on my left side.

I clenched my teeth, arched my back, and grabbed the phone. Then I had to get it out of a sandwich bag I’d protected it in, with one hand, without dropping it down the hill, or then I might really be stuck! I called Katrina. The exchange went like this:

Katrina: Oh no! Where are you?

Katrina: Do you need an ambulance?

Moments later a motorist arrived on the scene. I waved feebly as he approached, thinking ‘this guy has got to see me.’ I feared for a moment that I might get run down. But the motorist jumped out and acted quickly. He looked at my arm and said, ‘you’ve got a broken arm, you need an ambulance.’ He was on the phone straight away but at the same moment I got a call from the ambulance service confirming Katrina’s call. I was afraid we might end up with two ambulances, or none at all! Thankfully the system can cope with this sort of thing.

Another motorist arrived, travelling uphill from Hurstbridge. He stopped his car and strode purposefully towards me, deducing the situation and keeping me talking. The two motorists blocked off the road, ensuring I was safe from oncoming traffic.

Both the motorists and the paramedics, when they arrived, asked if I’d been hit by a car. From their point of view it looked like I’d come off whilst climbing. I had to point back up to the corner on the other side of the road and say, ‘I slid from there.’

The ambulance arrived quickly, and like anyone who has seen paramedics do their job I was struck by how professional they were. How they juggle unmitigated efficiency with genuine compassion is something I remain in awe of. As the first health professionals you encounter in a crisis they are really indescribably important.

I was shaking badly now, I suppose from shock. The paramedics said they would give me morphine and I offered a half-objection, staying true to an anti-drugs ethos, though maybe not at the ideal moment! I took 5mg. The pain dulled but I continued shaking. Around this time they also cut my jersey off and I was suprised to see it had been shredded along the front – I have no memory of sliding on my front.

At this point someone pulled the bike up off the road, I could see the shifters were full of dirt and leaves. I recall someone mentioned it looked to be in better shape than me and I felt a wave of relief! I asked Katrina to stop the Garmin. Then I asked her to check if the power meter looked alright. I was aware this might have sounded a bit shallow in the context but I had to know!

The paramedics said it was probably going to hurt, getting me into the ambulance, and I reluctantly took another 5mg of morphine. My shaking stopped and I began to calm down. I kept thanking everyone around me and apologising for inconveniencing them. I probably did this too much but I was aware the motorists in particular were on their way to pre-Christmas gatherings and hadn’t reckoned on their day unfolding like this.

Loaded into the ambulance, I looked out through the doors which provided a surreal frame to the view of Flat Rock Rd unfolding in front of me. We got to the hospital in what felt like no time. Later, looking at my Garmin file I saw that the crash took place at around 11:36. I was admitted to the Austin a shade under two hours later, but it really didn’t feel like that much time had passed. For a moment I lay on the gurney with just Katrina beside me, we saw my heart rate was 51 so I couldn’t have been too stressed!

The main treating doctor turned out to be a road cyclist too. She walked in and said, ‘I’ve got the same shoes!’ She knew Kangaroo Ground and Flat Rock Road. It made me feel like I was in safe hands! At one point someone noted my low heart rate and she said, ‘This guy’s doing 300km a week, it’s alright.’

Not all the staff were cycling savvy, however. One doctor assumed it was a motorcycle accident due to the speed involved (I had guessed 60kph, 10kph faster than I was going) and was surprised that a bicycle could go that fast (good thing I didn’t fall off when I hit 94kph in Warrandyte!). Another doctor looked at my bib-shorts and exclaimed, ‘It’s a man-kini!’ Though to be fair they’d cut off my undershirt at this point and I was probably looking like Borat.

After a couple of hours of poking, prodding, X-raying, bandaging and waiting, I got the news. We were beginning to think it might just be bruising, but the fact that I still couldn’t move my arm after several hours didn’t bode well. In addition to a body covered in abrasions – left arm, right elbow, left thigh, left knee, right shoulder, right hip – I had sustained a fracture. But as fractures go, I was lucky: an undisplaced fracture of the greater tubercle.

There is a fracture in here somewhere. That sentence is a good sign. Not quite up there with better known x-rays (thankfully).

With this type of fracture, pain is the indicator of progress, and exercise is generally good, with bone healing responding to stress.

Christmas dinner was survived with gritted teeth and a few days later I had a physio appointment with Lucas Owen at cyclingphysiotherapycentre.com.au. Lucas is a local road cyclist, and just like the doctor at the Austin he knew the Flat Rock Rd descent too. It felt good to know there was a certain commonality of experience between me and the health professionals who helped me through this. As a result of this consultation with Lucas I emerged with a renewed confidence that I would be back on the bike ASAP.

With a week’s hindsight it feels like it would be easier to rationalise this accident if I could point to some fool hardy action as its cause. Then I could say to myself, ‘well, don’t do that again.’ But there was a hugely random element of luck, or bad luck, involved. I obviously hit something which caused the bike to lose traction, but this was not exacerbated by excessive lean angle, I wasn’t going that fast. Given the damp conditions you could say I should have been going even slower. Certainly a slower impact would have resulted in a lesser loss of skin, but the speed was relatively conservative given my experience with the bike and with the road in question. I’ve ridden through that corner faster and wetter (at the same time). Quite possibly tyre pressure played a role. The day before, I flatted on an unsealed road (as described in my previous post) and after I bled the CO2 out of the new tube I pumped it up to full pressure. I don’t know why I did this. At my weight I don’t need to run tyres at full pressure in the dry, let alone the wet, and this is something I won’t forget. Lastly, the Northern Cycling crit went ahead after all! So perhaps the moral of the story is that given the option, it’s better to race!

One thought on “Flat on My Back on Flat Rock Road”