My next post was going to cover the ups and downs of my club racing since the Mt Buller Rd race in March, along with some thoughts about the nature of competition. That post is taking a while to come together, so I’ll jump in with a short one to say I got my first win for the year today!

The race was the 2014 McCallion Handicap at Seymour. Luckily we didn’t have to face the sub-zero temperatures that greeted riders when Northern Cycling last staged a race in Seymour, and the forecast rain stayed away too. I raced in the 10 minute group (19 mins after limit, 10 mins before scratch) and we rolled well together.

At the turn-back a marshal said the lead rider was more than nine minutes ahead of us. That sounded like a lot of ground to make up over 26km, even if they were in a slower group. We’d lost one rider on the way out to the turn-back point but some of those we caught on the return leg were able to hold on and help keep the turns going. I remained hopeful.

Nearing the turn-off to the final series of climbs, before the descent to the finish, I sensed fatigue in the group and broke away. I’d have no chance if it went to a sprint with the group, and scratch would be bearing down on us anyway. The hills beckoned as my chance and I went for it. 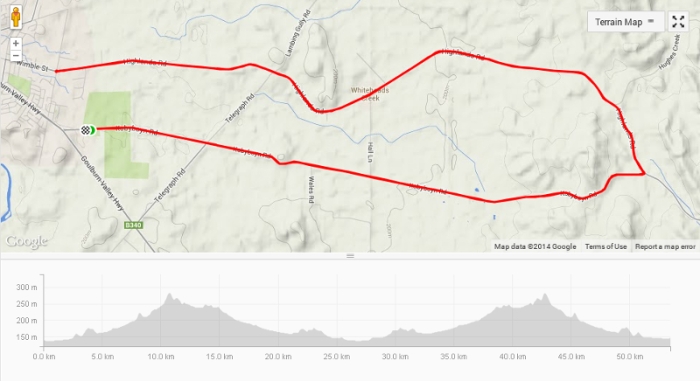 The McCallion Handicap course at Seymour

Over the top of the first climb I almost descended into the back of the lead car – I had to grab the brakes and shout ‘Go! Go! Go!.’ After the race I found out scratch were so close at this point that they saw this, and one guy wondered if I was drafting the car!

I buried myself, watching the power numbers and reminding myself what I could hold even if my legs were telling a different story. A quick look back and I saw one rider getting closer. I was about ready to cave in when I saw a 1km-to-go marker. It’s the first time Northern have used such a marker and it really gave me renewed energy.

I crossed the line first, only thirteen seconds ahead of Darren from scratch (who won the prize for fastest race time). Tony, from my 10 minute group picked up third.

You can watch a Strava Flyby of how the race played out here (at least with those who’ve uploaded their rides!).

BraveDave has written an account of this race at his blog too – read it here.