That was the crowd figure announced at the final presentation for the Tour Down Under, for the whole event. Of course that must include counting the same people twice or we are approaching a thirtieth of Australia’s population – just at a bike race. Let’s assume most people who went attended an average of four stages – that’s what we did, and some friends who were there for the whole event took a day or two off from it. Then you’re looking at 191,000 unique spectators. Maybe … there were a lot of people there. For a short window, Adelaide really was a kind of cycling nirvana.

I’ll start with a recap of stage 6 and some photos, then offer some thoughts on the race.

We checked out of the hotel and made our way down to Rymill park in time to see the riders arrive and sign on.

After his heroics the day before, Jens arrived and added a little artistic flair to his sign-on: 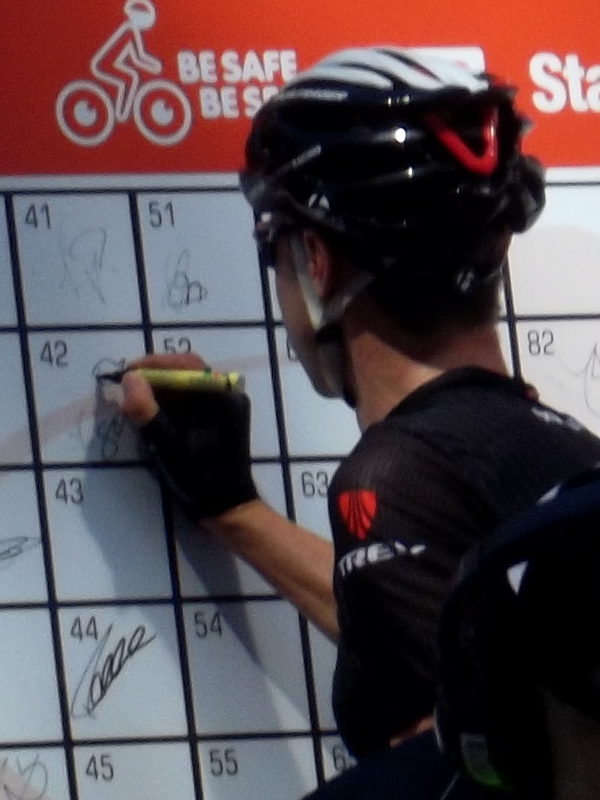 Asked, by the interviewer, ‘why did you draw a fish?’, Jens replied, ‘just to show that I am happy.’

Caleb Ewan acknowledged the city crit circuit would suit him, but said the tour had been ‘hard.’ He looked a whole lot less fresh than when on the podium at the People’s Choice Classic a week earlier. Fair enough!

A crash in the opening moments of the race saw Will Clarke get away on his own for a short time before he was joined by two others. The break of three quickly established 90+ seconds over the peloton: 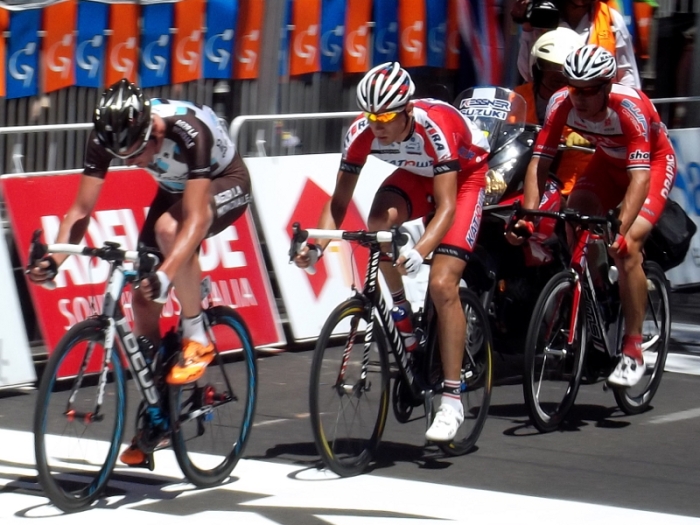 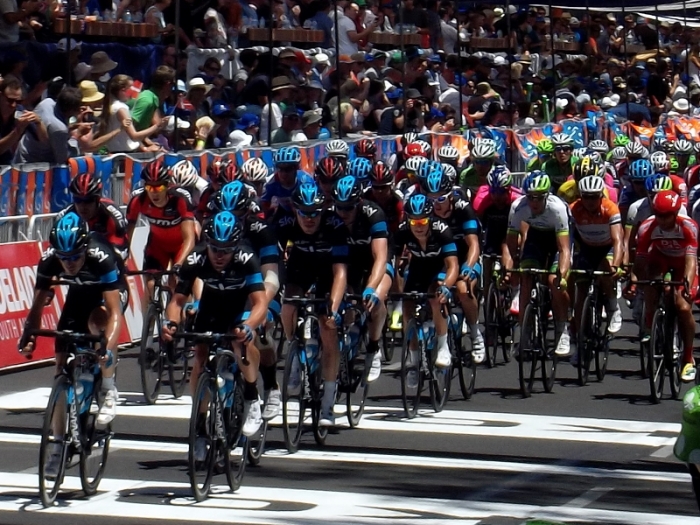 Clarke flatted and it looked like the break would get away from him:

But they let him back to help maintain the pace:

The peloton began driving a harder pace with Jens on the front again:

The bell rang out as the peloton crossed for the last lap, now completely strung out with a precession of water carriers and climbers limping along in the rear. A few minutes later the lead-out groups emerged at the top of the straight and Greipel powered away, crossing the line with an easy confidence: 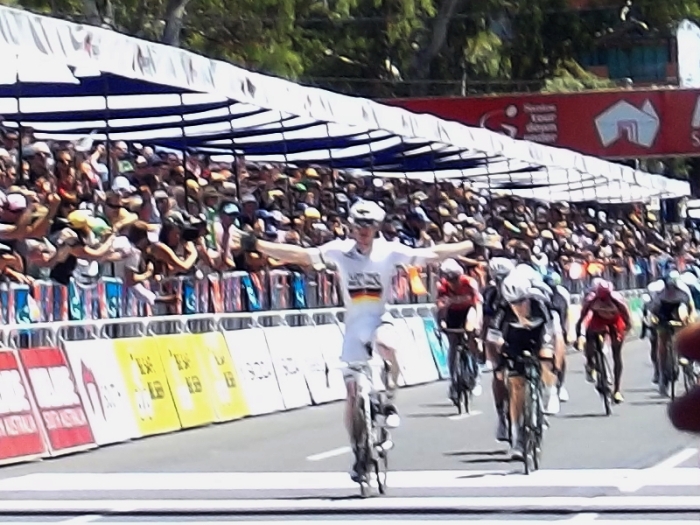 Of course, none of this affected GC, and Gerro stood as overall winner by a mere second over Cadel: 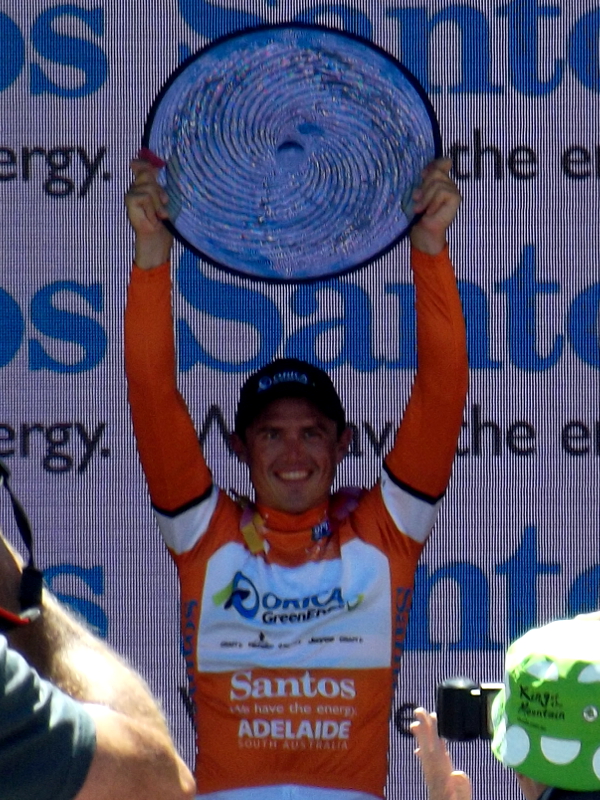 We were tired, but happily so. It had been an amazing four days.

Thoughts on the Tour:

I’ll try to distill my ideas into a simple list of pros and cons:

The natural environment of Adelaide.
Like a lot of folks from Victoria I had previously felt that any real ‘Tour Down Under’ should include the real mountain climbing on offer in our state. Now I’m not so convinced. Adelaide is hillier and more beautiful than I’d realised. I’d like to see some changes to the parcours but I think what the tour needs can be found in Adelaide

Central location
Being able to stay at one location throughout is good for spectators and riders.

Heat
The weather in Adelaide is guaranteed to be hot and dry around this time of year. Most of the Australians are used to it, most of the northerners like the respite.

Crowd intensity
The crowds are amazing and the scenes on Willunga Hill were something I’ve only seen equivalents of in the Grand Tours, and then perhaps only the TDF.

Cyclists
Having thousands of road cyclists all converged on one small city is magical if you are one yourself. It created a feeling of safety I was unused to. I’m not talking about driver sensitivity, as I wasn’t riding (through friends reported this), but of an attitude shift where road cycling is not just mainstreamed, but esteemed. This makes a huge difference to the hostility we’re all so used to. It’s problematic that I can say this at all, of course.

The TDU is still a sprinter’s race.
The fact that the winner can also hold the sprinter’s jersey is proof. Yet clearly, the climbing stages produce the most drama, the most fun for spectators, and the best TV images. A little more climbing would go a long way for the event. Related to this is the issue of time bonuses, which suit the sprinters preponderantly. Take away the time bonuses and Cadel is the winner by eleven seconds. Arguably the strongest rider didn’t win.

Podium Girls
Archaic, and offensive. Australia should lead the way in ending this. The organisers must know it’s wrong, hence their referring to them euphemistically as ‘hosts.’ If you think it belongs to the traditions of cycling, think for second of an aspiring junior female rider watching the presentation. How would she feel, what impression would be made? In fact, a perfect replacement would be local juniors, boys and girls. Imagine how inspiring it would be for them. It’s time we made the change.

Live sites
The commentary at the corkscrew was substandard. The guy seemed to have come from outside cycling. It’s a small location and a screen wouldn’t fit but it shouldn’t be too much trouble to fit audio relays at the KOMs. The blaring dance music at the central live site annoyed everyone.

Heat
Also a con: We got lucky with days between 30-35c. The previous week’s run of 40c+ days could have wrecked the event. Maybe a reason for shifting it closer to the start of the Euro season.

Cyclists
Also a con, sort of: It is a bit of a MAMIL-fest. Before I offend any older friends with this comment what I find distasteful is a certain air of wealth and machismo in this set which was on display here and there, but not universally, in Adelaide. It is problematic that in my mid thirties, I still feel young almost everywhere I go in the cycling world. I don’t know what to offer as a solution (make bikes cheaper maybe!), but if the event continues to grow perhaps this will change. There were young cyclists and women cyclists everywhere too, just a lot more older guys. Also, unrelated to age, if you care about the aesthetic traditions of cycling culture you’ll want Zaphod Beeblebrox style sunglasses that black out when you get scared.

Some thoughts about Adelaide

Adelaide has changed a lot since I was last there fifteen years ago. Then, there were racist posters on street corners, now the city is significantly more globalised. In the CBD and inner-urban areas at least, a burgeoning East-Asian influence is making the city feel more international. On our first night we discovered a Taiwanese dessert bar selling tofu pudding and sweet taro – we ended up going there every night!

In other ways Adelaide still feels about fifteen years behind other Australian cities. But from a cycling perspective it’s close to perfect. Light traffic with a flat urban area, and good climbs close by. All it lacks is a proper mountain climb. There are a few Cat 1 (Strava definition) routes up to the summit of Mt Lofty, but no HC climbs.

All up, this was an awesome holiday. I was quite happy not cycling for the four days. It meant Katrina and I could do everything together, and I would do it this way again. Still partly recovering from injury, it was good for me to do a big block of training in Melbourne and then take four days off. I would like to go for a separate holiday there, perhaps later in the year, to train on the iconic climbs away from the crowds.

Either way, we’ll be back.

After moving the hose - an indication of the amount of desert dust which has ended up in Melbourne.
Watch out for Emus! #chapellane #greenwedgecycling
#commuter rebuilt. I ran this into the ground last year to save money. Now a thrifty but very nice rebuild with first gen #sramred22 from @racing_claire's crashed Amira, new #praxisworks chain rings, a #Duraace cassette from my Tarmac and some dark silver bartape I bought 2 years ago. I can't afford new tyres but I gave the old ones a scrub! Over 70,000km on this frame. #specializedroubaix
#lovecats #burmese #burmeseofinstagram
@racing_claire has done something special again! #vegan #vegandessert #veganicecreamcake
#lovecats #burmese #burmeseofinstagram