This Sunday past saw the 2014 Coburg Cycling Club Road Championships take place on a new course, around the hills of Arthurs Creek and Nutfield.

The course started at the Arthurs Creek CFA, then proceeded through the rolling hills towards Mine Rd where an initial climb averages 8-9% for almost a kilometre. After undulating over to Cottles Bridge – Strathewen Rd the course then saw a 1.6km descent at -3% and a final climb of 4% for 600 metres before a winding, mostly descending, route back to the finish line. A twelve kilometre course with five laps for the masters race, and six laps for elite.

It was sunny, cool, and with a moderate south-westerly wind, as the masters group moved out on the first lap. A little nervous tension found expression in the bunch, with momentary attacks from a few riders, but nothing with real commitment. Before the race, the age-based grading system had concerned me. I figured I might get left behind by otherwise higher-graded riders, so I was quick to cover these little flourishes on the way out.

It soon became clear that most of us were waiting for the Mine Rd climb and suspecting that the steep initial grades of the road would prove decisive.  This is exactly what happened, and on the very first ascent.

As we approached the turn on to the climb I accelerated then dropped into the small ring – this was meant to set me up for the uphill charge but I ended up under-geared. ‘No worries’, I thought, ‘keep spinning and the steepness will match your selection’ … as most of the pack began to pull away! Frustrated, I shifted into a harder gear and began to reel them back in.

I’d passed most of the others by the end of the initial climb except for one rider, in a red jersey, who had really attacked hard and had gone off the front. I was stuck between the pack and the solo breakaway as we pressed over the undulating top of Mine Rd. I was gaining on the breakaway, but the others were gaining on me a little faster, so I eased off and waited for them.

But as we regrouped, the gap to the solo break visibly increased. We flew down Cottles Bridge – Strathewen Rd, where tailwinds saw us nudging 70kph on the gentle descent, to the course’s second notable climb. We appeared to be holding station with the solo rider but he made good use of the subsequent descending and cornering and we lost sight of him.

The section from the top of the second hill, which descends steeply into a hairpin turn, and the final descending corner on Nankervis Rd, before that road straightens up and runs into Hurstbridge – Arthurs Creek Rd, had worried me when I first saw the course. Eastern Vets have a rule of neutralising racing through the hairpin and I’ve been told there have been some accidents there. The corner in the middle of the Nankervis descent has a slightly odd line that makes it hard to judge the apex and easy to choose a premature turn-in point. I wanted to be at the front throughout these turns and did lead the bunch through them on every lap. After completing the first lap I supposed the second climb, and this series of corners, were going to decide the race, at least for the bunch.

Leading the remaining bunch at the start of lap 4. Photo: Alex M

I found myself stuck on the front for most of the second lap. I knew it was a risk, but I wanted to close the gap, and evidently no one else was going to come past at this point. For the second time around, it seemed most of the riders were saving something for Mine Rd and the group surged up the climb. From the front I called out I’d sighted the red jersey of the breakaway. ‘Just leave him there’, one rider replied. I didn’t share the confidence that the guy out front could simply be hung out to dry but I didn’t want to burn myself up dragging the group over to him. He disappeared again, off into the distance, not to be seen until after the race.

By the start of the third lap I’d had enough of riding on the front, began to complain a bit, and then figured I’d just sit up. If they wanted to race they’d have to come past. For the next two laps I took the front for the second climb and winding route back to the finish line, but then sat on the group from there until Mine Rd. It was clear at this point we were not going to catch the break.

Turning on to Mine Rd the second last time, I accelerated from a few positions back and tried to get up the climb ahead of the group. I didn’t expect to get a workable break, but I needed to know where everyone was at. One rider, in a white jersey, held onto my wheel the whole way.

I forced the pace for most of the rest of that lap and then as we crossed the finish line for the last lap a rider shot past me.

I couldn’t respond at this point, after leading through most of the penultimate lap. I turned and shouted as much at the group, but no one responded. The gap began to grow. I hadn’t thought anyone else would be able to use Mine Rd to get away, but now I realised a gap of a hundred metres at the top might be too hard to pull back over the remaining distance. Unless we could get some kind of cooperative effort going we’d be gifting him second place. I shouted at the group again and the same rider who had held my wheel on the previous ascent of Mine Rd agreed to help. Between the two of us we brought the bunch back together for the final Mine Rd ascent.

For a moment, as we pushed over the top of Mine Rd the last time, I had some very non-competitive thoughts. I thought how nice it was to be a part of such an old club, racing on such a beautiful course. I felt that some sense of solidarity had been forged between those of us who’d stuck together through the race. I felt like congratulating everyone. Of course that would have to wait … 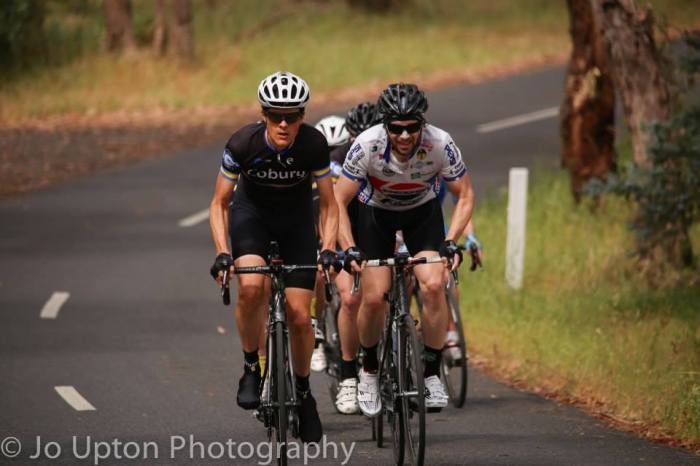 We hit the last climb and I went as hard as I could, over the top and down into the hairpin, running a little wide, down onto Nankervis Rd, anticipating someone would shoot past, hitting the Nankervis descent, no red flag on the corner …

I rode at the front as we turned towards the finish line. I don’t think I have a fast-twitch muscle fibre in my body but now some kind of sprinting was going to be required. With about thirty metres to go I stood up and went for it. A second later the rider in the white jersey overtook me. Another rider was closing but in the final throw I just pipped him and held on to the podium.

I’d got third place and I couldn’t quite believe it, having started the race afraid of getting dropped by the bunch. The absence of a few well-known masters riders might have opened the field a bit, but we’d had a good hard-fought race and I was very happy with the experience. The atmosphere of camaraderie after the race was just great and I got to meet David, who had beaten the bunch home by more than a minute with his solo breakaway, and Chris, who had worked with me to pull the bunch back together on the last lap and who had gone on to take second:

In the elite race, José Areta took the win, closely followed by Andrew Gray, and then Stephen Lane who crossed the line comically with a fortuitous escort of Harley-Davidson riders.

Abby and the volunteers did a great job in running the day. This was really one of the stand-out races of the year for me – and one of those days where I just feel so happy with the bike. We all have days where we are left thinking, ‘why the hell do I do this?’, but days like this are the antidote.